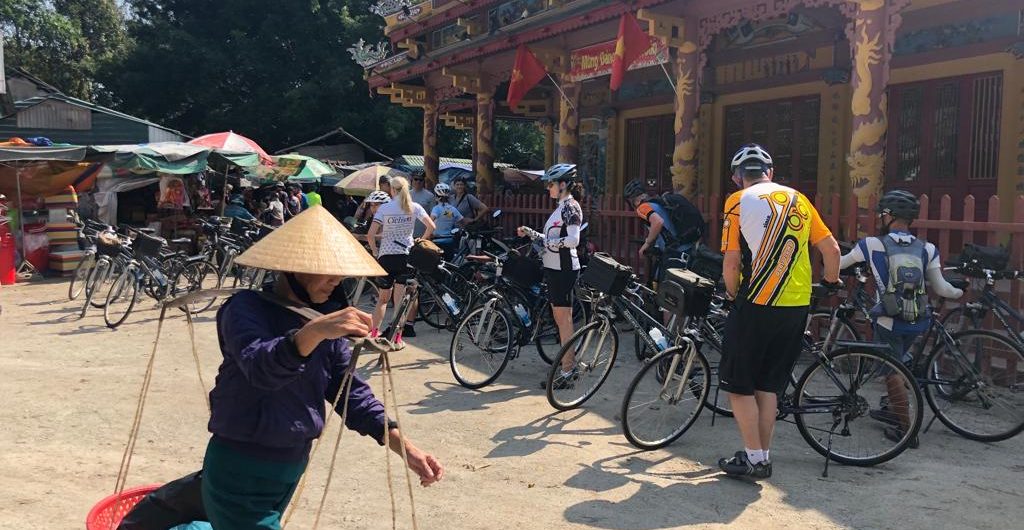 I first visited Vietnam in 2003 as part of a 3-month, 5000 km cycling adventure, some of which wasn’t entirely enjoyable. I brought along a copy of Lonely Planet’s ‘Cycling Vietnam’ which suggested that the ride to do was from Hanoi to Saigon, along Highway 1. I can definitely attest to the fact that this route is not suitable for cycling due to the constant trucks with loud horns that use the highway. The good news is that there are lots of amazing cycling routes in this country, but they aren’t in Lonely Planet or any other guidebook I could find. I found many of the best routes through our local guide who knows the myriad of tiny paved roads and paths that zig-zag through the countryside that make the cycling truly enjoyable. I call him the ‘Professor’ because of his immense knowledge of the history and culture of Vietnam, of which there is a lot.

When we initially designed the trip, I knew that we had to include the cities of Hanoi, and two nights in each of the Imperial City of Hue, Hoi An (Vietnam’s most charming town), Nha Trang (for its beaches and Ana Mandara Hotel) and Dalat (for its history and cool temperatures and the variety of fruits and vegetables that are grown here). For those that want to extend their trip, we offer two day extensions to each of Halong Bay, Mui Ne, Saigon and Angkor Wat (Cambodia) so travellers have the option to do more cycling while seeing more of Vietnam and Cambodia.

I have returned to Vietnam several times since 2003, my last trip taking place in February 2020.

The good news is that Vietnam is actually more appealing than ever, and here is why: there are more and more e-mopeds and e-bikes on the streets of Hanoi so it’s still chaotic to cross the street, but quieter. There have been lots of additional roads paved out in the countryside so the surfaces are better, but still very little traffic on the roads we cycle. Finally, there are new restaurants, some of which are of international standard, providing more variety.

I arrived in Hanoi on February 1, just after the Tet holiday of 2020. This is an interesting time to visit because it is relatively quiet and homes and villages are still decorated for the holiday. As you walk through Hanoi there are reminders of the French occupation in the architecture, bakeries and cafés. The group met up at 4 pm in the lobby of our 5-star hotel, The Hotel Metropole, for a bicycle rickshaw tour of the historic district. After the tour, we walked to dinner at Quan An Ngon for authentic Vietnamese cuisine. The owner of this restaurant recruited some of the top street-food vendors to cook their signature dishes in the courtyard of an old villa… Most of the group had returned earlier in the day from the Halong Bay Extension, which I would highly recommend as it gives you two days to acclimatize while cruising through the 5,000 limestone islands that make up Halong Bay.

On Day 2 of our trip, a short flight whisked us to the Imperial City of Hue, where our bikes were waiting just a few km from the airport. My wife, who had never been to Vietnam, was fascinated by the sights of  temples and rice paddies and an abundance of cultural sites. We cycled just 30 km on almost completely flat terrain through to the Citadel of Hue. Here, our guide took us through the Imperial City, explaining how the Nyguyen dynasty (1802-1945) lived inside the Forbidden Purple City with eunuchs and concubines. After our tour, we transferred the short distance to our hotel, the exquisite 5-star Pilgrimage Village Resort, with its Olympic size swimming pool and well-tended gardens. We met at the bar prior to dinner for an in depth history/cultural talk, where our guide gave us a thorough introduction to the history of Vietnam.

Next day, we cycled from the Imperial City through more scenic countryside ending at the home of a princess related to the Nguyen dynasty. The guests were quick to realize that on this trip, there was so much to see along the way. After our visit, we walked to the aptly named Perfume River, where a dragon boat awaited and we cruised upstream while enjoying lunch. This was a very peaceful and enjoyable way to see the countryside and after disembarking, we visited the tomb of an emperor. Afterwards, most in the group elected to zip back to the hotel (that swimming pool beckoned) but some of us did the extra ride which was a rolling and scenic 15 km spin back to the hotel.

Day 4, we biked about 50 km, again quite flat and gently rolling. We got our first views of the coast here and cycling through small villages with waving children yelling ‘hello’ was quite a sensation. After lunch, everyone had the option of cycling up and over Hai Van pass, which took those of us on bikes about 1 hour followed by an exhilarating descent towards Danang but again, most opted to shuttle straight to Hoi An where another lovely resort hotel and pool awaited. Hoi An is Vietnam’s most charming village, filled with lanterns, and lots of artisanal shops and great restaurants. We went for a walking tour of town followed by a visit to a tailor that makes ‘made to measure’ suits and outfits in less than 24 hours at bargain prices.

We took part in a cooking course for dinner and our instructor was absolutely charming. We do cooking courses on many of our trips in Europe, but I must say this one is in a class of its own. On our second day in Hoi An, we cycled from the hotel out through the gardens of the city and met an old man who was in his 90’s and had farmed here his whole life. Back in town, everyone took the opportunity to walk the streets of Hoi An. Some took advantage of the spa and massage services on offer (for as little as $13/hour), and then for our OYO (on your own) dinner, some of us went to a new Japanese fusion restaurant called Tadioto which was superb.

On Day 6, we flew from Danang to Nha Trang, a bustling city on the sea that boasts my personal favourite hotel – the outstanding Ana Mandara hotel located right on the beach with two swimming pools, swish spa and more. We arrived to lunch at the hotel’s restaurant and then some in the group cycled along the coast – on this day we encountered lots of local cyclists on race bikes which was fun to see. On every trip (even our luxurious ones) we try to have at least one local night out and our guide took us to his favourite Vietnamese BBQ restaurant. It was a night to remember and for some in the group, a favourite meal. Next day, we cycled out through the countryside and then returned to the hotel for time to walk the beach or relax. In the evening, we had dinner at the hotel’s beachside restaurant where a dozen staff served a delicious feast of sea-food and other specialties of the region. At meals like this, we dine family-style which is fun and everyone loves the variety of cuisine on offer.

From Nha Trang, we rode inland on Day 8 towards Dalat and the temperature dropped a few degrees as we gained elevation. After lunch, we got back into the vehicles and climbed higher and higher. Closer to Dalat, some of us got out to ride mostly downhill towards town. I love this day as the riding is quiet and the scenery is spectacular. In Dalat, we stay at the 5-star Dalat Palace, a historic property that recently added a new wing for those that prefer modern décor and updated rooms. I personally love the historic rooms in the original hotel, with hardwood floors, clawfoot tubs, high ceilings etc. We dine out on this evening at one of the hundreds of local eateries in town.

On Day 9, we cycled from the hotel out through the countryside descending almost 1,000 m, stopping to taste coffee and to visit a silk factory. Back in Dalat, we toured the local markets and people shopped for souvenirs. As this was our final night of the regular trip, we met at the piano bar for a reception and then moved to dinner in the formal dining room overlooking the lake. It was a festive finish to a great trip. The following morning some of our group departed for Saigon by flight but many continued on with our Extension to Mui Ne (two more splendid days of cycling). Everyone who did the Mui Ne Extension really enjoyed it as the cycling was superb and two more days at a beach village added nicely to the trip. The Saigon Extension followed this with one more day of cycling along the coast towards Saigon, followed by a ½ day tour of the Cu Chi Tunnels. We had lunch at L’Usine, a cool and hip restaurant above a gallery and then in the evening, dined at Xu, a fantastic restaurant just steps from our hotel. These two restaurants would attract a following in places like NY or San Francisco. Saigon is a fascinating city, much different from Hanoi. The next morning, some flew on to Angkor Wat for two final days of temple touring. After two weeks of glorious cycling, vibrant culture, outstanding food and great company, we returned home. I am already looking forward to returning.

If you go
Great Explorations operates cycling trips in Vietnam in December, January, February and March. The trip itself is 10 days/9 nights with 7 days of cycling; US$ 3,650 pp. Bike Rental: US$ 280. For an additional 3 days of cycling, book the Mui Ne (US$ 695 pp) and Saigon (US$ 695 pp) Extensions. Halong Bay is also amazing, especially by cruise and Angkor Wat also deserves at least two days.