In 1995 I read about a trail that crosses British Columbia along former rail lines that weave through spectacular scenery including the Okanagan-Similkameen region. The railways through BC are comprised of five subdivisions that make their way across 500km of mountains and valleys from the Kootenays to the west coast. Built in an age when all freight and passenger movement was mainly by rail, by 1973 the trains had stopped running and in 1978 the tracks were removed. Finally, in 1990, the National Transportation Agency authorized the abandonment of the remaining tracks.

In the book ‘Cycling the Kettle Valley’, Dan Langford wrote that one could bike from Castlegar to Hope (over 700km) along these abandoned railway lines and that it would be a historical journey. I was single, care-free and decided to make my way by bus with my bike from Vancouver to Midway, the starting point of the Kettle Valley section of trail. The bus dropped me off at 4:30 am so I made my way to the Kettle River, pitched my tent and went back to sleep. I was pretty fit in those days and liked nothing more than a challenge so I traveled light with panniers to carry a small tent, sleeping back, cookstove and limited food. On the first day I planned to cycle to Beaverdell and then to Hydraulic Lake where I could re-supply at McCulloch Lake Lodge. It was April and quite chilly, but I was prepared or at least thought I was. After cycling 70km (and loving it), I arrived to Beaverdell and purchased a few things at the spartan General Store and explored what remained of this once bustling village including the Beaverdell Hotel, BC’s oldest. I then continued towards Hydraulic Lake and the McCulloch Lake Lodge, some 50km further. I arrived late afternoon quite tired and found the lodge to be closed so I kept riding, with my goal of reaching Chute Lake Lodge, another 50 km away. I rode across Myra Canyon’s timber trestles, which were quite spectacular – there was no-one else on the bridges or in the canyon so I had the surreal experience of enjoying the serenity of magnificent scenery alone. 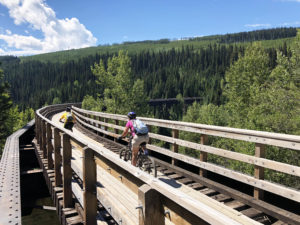 Part of the appeal of this journey was the remoteness of this route, but it also meant there were very few opportunities to find food. Fortunately, there are lots of rivers and lakes so water wasn’t an issue. By about the 140km mark, I was quite tired, and it was dark so I camped along the trail. At 6 am, not being able to sleep (it was cold and I was hungry), I continued on by bike to Chute Lake, fortunately finding the historic lodge open, and the owner, Doreen, inside with the fire roaring. It was 8:30 am and although the door was open, she wouldn’t let me order food nor enter until 9am, so I sat outside in the cold morning air and waited with anticipation for breakfast. When breakfast was served, I devoured it and basked in the warmth and comfort from my table overlooking the lake. I continued on to Naramata through rolling vineyards, then through Kelowna which is one of the cities that the route passes. After a big lunch, I climbed up to Summerland, with its beautiful orchards and lakeside setting. It was here that I realized this trail would likely become very popular, as it really offered a great way to see this part of BC. But west of Summerland I ran into a problem. I arrived at a river crossing to discover that the steel bridge described in the book was gone. I tried several times to cross the river, but with the falling snow and freezing water it was too risky to attempt alone. I reluctantly turned around and cycled back to Summerland and boarded a bus back to Vancouver. I contacted CP Rail to enquire about the missing bridge. I was dismayed to learn that they had removed that bridge and 2 others, and that plans were in place to remove many more. The reasoning was that the BC government had only purchased the rights-of-way, but not the bridges, (something to do with liability), so they were intending on taking out steel bridges all along the route.

I decided to use my skills as an event organizer to raise awareness of the Kettle Valley trail and the bridge issue. I approached Mountain Equipment Coop (MEC) to let them know I was organizing a Kettle Valley Railway ride. MEC allowed me to set up a table in the lobby of the store and within 2 weeks, I had 26 people signed up to ride the KVR from Midway to Hope. I also called the Vancouver Sun and Dawn Hannah wrote a full-page article titled ‘Disappearing Bridges’. This generated additional press and CP Rail agreed to not remove any other bridges. By that time we had already pressed ahead with the planning of the bike trip. I explained to the participants that we would have a little beer and wine bar each night and the proceeds would go towards purchasing lumber and materials for a bridge repair project that I had in mind in the Tulameen section of the trail. I joked that the more they drank, the better the bridge would be. Our group included an eclectic group of mostly BC residents that included Leon Lebrun, the then president of Trails BC. During the trip, we succeeded in building a small bridge but realized for future events we would be better to donate to local rails-to-trails groups and let them build bridges and do maintenance. 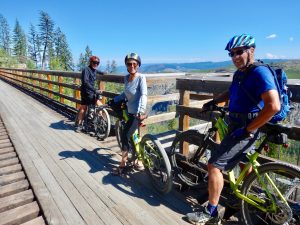 The next year, we approached the Outdoor Recreation Council of BC and donated through their organization. For several years, we advertised a cycling event along the KVR, but never had more than 20-25 people register so we decided to offer multiple small-group trips through the summer and offer it as a regular tour along with our other trips. It became a popular trip for us but finding guides to lead this trip was tough; most guides preferred much easier trips where they got to stay in nice hotels and not have to do any cooking. But we had some hardy guides including Phil Rueben, who loved the history and route, and he and I lead countless trips together in the early years. In 2003, fires destroyed the Myra Canyon trestles and while they were being rebuilt, the number of people cycling this route declined significantly. We continued to run a few trips, finding a detour around the trestles, but even when completed (at a cost of $13 million) the Kettle Valley never really fully regained its popularity.

Despite the drop in client numbers, we continued to offer trips along what we called ‘Stage 1’: Castlegar to Beaverdell; ‘Stage 2’: Beaverdell to Princeton and ‘Stage 3’: Princeton to Hope.

In 2004, I invited a friend named Monika to do the Stage 1 trip with us – cycling from Castlegar to Beaverdell. Monika had lead cycling trips in Europe and around the world for years and afterward announced that cycling this route was one of her favourite trips – perhaps because her and I became a couple (and still are today). We had two children in 2005 and 2007, and although we ran trips as a company in the interim, I myself did not go back to lead a trip along the KVR until 2018. I wanted to return to see the current trail conditions and to decide if we should continue offering it.

On the 2018 trip, we had 8 people sign up. I loved the experience of cycling this route again and camping and cooking and all that goes with this. The riding itself was better than I imagined – the trail was soft in places but overall I thought it was great. I GPS’d the route and added POI’s (points of interest) and found a few other ways to improve the trip and I vowed to return the next year and to bring Monika and the kids (now 12&14).

So we did. In the summer of 2019 we set off with 12 people on Stage 2 from Beaverdell to Princeton. Our group included travellers from Australia, the US and across BC. I convinced a musician and BC native named Patrick Spencer to co-guide with me and having him sing and play around the campfire each night made the trip really special. Our children loved it, despite being the only children on the trip. We met fascinating people on the trail including a father and 6 year old daughter who had biked from Victoria and were riding all the way to Alberta. What an adventure! We also met a bike packer who had just completed racing 1040 km from Merritt to Fernie and was riding back to Vancouver afterwards.

One of the great things about people who sign-up for a guided trip like this is that they are often happy to go outside of their comfort zone. While there is some roughing-it involved, we provide enough support to make it a more comfortable experience. When our trip finished in Princeton, another group arrived to ride the Princeton to Hope section. My wife and kids headed back to Vancouver and Patrick and I (and two fresh guides) supported the final stage. We biked to Coalmont and down the Tulameen Valley, passing over the location of the bridge project we built back in 1996 (full disclosure – the bridge washed away in the interim). It brought back memories of that first trip and of the hundreds of people we had introduced the trail to. For the majority, the appeal of riding along the Trans-Canada trail was remarkable. I have done this trip now dozens of times and will likely continue to ride it annually. It really is a very special experience and for cyclists who are up for the adventure, one you should definitely have on your bucket list.